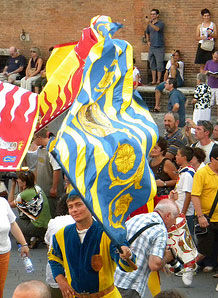 When the Palio (the famous horse race) draws near, the city of Siena changes into a flood of colours. All ‘contrade’ (city wards*) decorate the streets of their territory with coloured banners and handmade lanterns. At every corner of the street you will hear the songs of the different ‘contrade’; in gardens and courtyards you can see men and boys who learn how to throw coloured banners in the air at the rhythm of drums – the unmistakable sound of the city in those days.

Ceremonies start three days before the race, with the choice of the ten horses at the famous Piazza del Campo. The heat of the Palio is already palpable at the drawing. When the mayor of Siena reads the number of the horse and the name of the ‘contrada’ to which the horse will be assigned, the Piazza falls in a surreal silence. Within a few minutes this silence can be transformed in joy or in despair, especially when hostile ‘contrade’ participate. After the drawing of the horses all ‘contrade’ choose their own ‘fantino’ (jockey), who will ride bareback and dressed in the colours of his ‘contrada’.

Before the Palio starts, every ‘contrada’ organizes dinner parties in its territory. Spending an evening there with the ‘contradaioli’ is always very suggestive and amusing. Particular importance is given to the festive dinner that takes place at the day before the Palio, just after the ‘prova generale’ in which the horses and jockeys already take possession of the Piazza. The winning ‘contrada’ will have the honour to organize the ‘cena della vittoria’ (dinner of the victory), which of course is even more festive.

The day after the Palio the ‘Drappellone’ (called ‘Il Cencio’ by the Sienese people) will be transferred from the Palazzo Comunale to the Collegiata di Provenzano for the race of July (which is held in honour of Madonna di Provenzano), and to the cathedral for the race of August, which is held in honour of the Assumption of Mary. A few days before the Palio of August you can attend a special ceremony in the cathedral, when all ‘contrade’ offer a special candle to Mary.

During all this ceremonies, the city is captured by a festive air, but you will also notice a feeling of trepidation and rivalry between the different ‘contrade’ of Siena. Even if you are not a real ‘contradaiolo’ it is exciting to assist at this famous event and to taste the special sphere in the city!

The Scuola Leonardo da Vinci is situated in the Heart of the Old City of Siena, just a short walk from the famous Piazza il Campo. From our school you can reach the most famous squares and sights in a few minutes' walk.