10 things not to miss in Milan!

Every year thousands of tourists, students and business travellers come to Milan.  Be it for work, pleasure, or both (for example studying at Scuola Leonardo Da Vinci), you should take advantage of certain attractions during your time in this amazing city.  Some may seem obvious, you will find them in guide books or already know about them, but other destinations are hidden gems and Scuola Leonardo Da Vinci wants you to know about them! 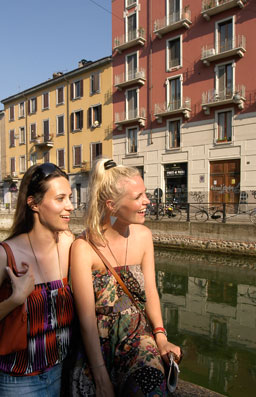 1) See Milan from the top of the Duomo: The Duomo is breathtaking from the outside but you have to go to the top to fully appreciate it. At the top you can walk among the structure itself, admire its intricacies, and if the sky is clear, you have before you an amazing view of the city.  Many people don’t realize that you can go to the top and yes, there is an elevator.  Cost: 5€ stairs, 8€ elevator. Tickets can be purchased at the Duomo Information Point directly behind the Duomo.
2) Mangiare Un Panzerotto at Luini: The Panzerotti dough recipe is a family secret, safely kept by the entire family. When you go, order a “Panzerotto Classic” with “mozzarella e pomodoro”.  You will want to make a trip back before you head home in order to take one on the plane. Location: Via S. Radegonda, 16.
3) Gaze at L’Ultima Cena: Even if you have never studied art history or watched The Da Vinci Code, go see Leonardo Da Vinci’s Masterpiece.  In Milan, The Last Supper requires a reservation. Plan ahead for this visit; reservations can be made at 02-9280-0360. 25 people are allowed in every 15 minutes for exactly 15 minutes. The school also organizes group trips to Santa Maria delle Grazie to view the unforgettable painting. Cost is 8€. Location: Santa Maria delle Grazie, 2
4) Take a cruise along the Naviglio Canal: The canal from the Ticino to the center of Milan was made navigable at the end of the 14th century to help transport the marble that was needed to build the Duomo.  The cruise is about 1 hour on the Naviglio Pavese and the Naviglio Grande where you can enjoy the picturesque atmosphere of the antique houses and shops. The boat fits 48 people and leaves only on Friday, Saturday and Sunday from 10.15 to 18.15.  Location: Alzaia Naviglio Grande 4
5) Dine on the Atmosfera Tram: This is a “restaurant tram” that takes you around the city as you dine on a delicious meal, including typical Milanese dishes.  You must reserve a “table” and select your menu choice by calling 800.80.81.81. The tram leaves from Piazza Castello/Via Beltrami at two different times, 13:00 for lunch or 20:00 for dinner. When you call, you need to indicate how many people and you menu choice.  Before your trip, you will be sent a text message with a code; you will need this code when you enter the train.  Cost 65€.
6) Stroll through the Galleria Vittorio Emanuele II: The Galleria Vittorio Emanuele II is a covered double arcade.  It connects the Piazza del Duomo to the Piazza della Scala. Named after Vittorio Emanuele II, the first king of Italy, it was originally designed in 1861 and built by Giuseppe Mengoni between 1865 and 1877.  The four floor mosaics represent Milan, Florence, Rome and Turin. It is an elegant shopping area as well as home to several restaurants and bars.  Inside the Galleria, you will find a mosaic of a bull with the Turin emblem inside the octagon floor pattern. The tradition goes that placing your right heel on the bull’s “private area” and spinning around three times to the left brings good luck. Why not?
7) Visit Teatro alla Scala Museum: The Teatro alla Scala Museum was founded in 1913. Just like the opera house, it was restored a few years ago and reopened in 2004 with a new display by Pier Luigi Pizzi. Besides being a meeting place for the general public, the Museum is a point of reference for opera enthusiasts and for scholars.  The Teatro alla Scala Museum tells the life of the opera house through a vast collection of musical instruments, portraits, busts and documents dedicated to the greatest musicians, from Giuseppe Verdi to Arturo Toscanini.
8) Visit Parco Sempione:  An oasis from the city, within the city.  Parco Sempione is Milan's largest park with a central meadow, an artificial lake and a fountain designed by De Chirico. It's perfect for long walks, bike rides and summer picnics. The park also houses the Castello Sforzesco, one of the most popular sites in the city, the Arena, a neoclassic building designed by Luigi Canonica in 1806, and the Arco della Pace, a lesser Arc de Triomphe built for the glorification of Napoleon. Location: Metro: Cadorna, Piazza Castello
9) Enjoy Happy Hour along Navigli: Milan is the native city of the L’Aperitivo which means you have a cocktail during happy hour and you can eat for free as much as you like. Taking part in the bustling Naviglio neighborhood is a great opportunity to mingle among the Milanese and join in on a special tradition (as well as eat for a great price: 5 to 10 Euro).  Nowadays the L’Aperitivo scene has become an evening meeting for people of all ages, that's why some locals continue offer sandwiches and other snacks, but the greater part of them offer different kind of dishes such as pasta, risotto, salads, and even exotic food.
10) The Pinacoteca di Brera: The Pinacoteca di Brera contains one of the foremost collections of Italian paintings as well as futuristic paintings of the 20th century. The collections are particularly important in understanding the history of art in northern Italy between the 14th and 18th centuries.  There are also excellent examples of Renaissance works, and famous, if not numerous, paintings by other Italian masters. Only some of the rooms of the Pinacoteca are open to the public. Via Brera 28 Transit: Metro Lanza stop - Green (2) line; Montenapoleone stop - Yellow (3) line.